Metfriendly's Ten Year Savings Plan is an excellent way of putting something aside for the future.

If you want a simple, long-term savings plan that you can’t dip in and out of then this is ideal for you.

NOTE: You can request the first £25 of your monthly premium to be tax-exempt if you are not paying into a tax-exempt plan elsewhere. The tax-exempt part of your savings will be issued as a separate contract.

Watch this video for a quick summary of our Ten Year Savings Plan.

Many of our members also choose to start new plans every year. This can be set up automatically and is known as the Rolling Ten Year Savings Plan and means that after ten years you will start receiving a pay-out every single year – ideal for regular annual events like Christmas, school fees or holidays. See “What is the Rolling Ten Year Savings Plan?” below for full details.

What returns has this plan produced?
2.3%

More info and apply
Where is my premium invested?

The premiums are invested in the Metfriendly With-Profits fund. For information on what that is and how it works, including a diagram to show the approximate investment mix, please refer to the With-Profits fund page.

Can I cash in earlier?

Yes. The plan can be cashed in for a surrender value at any time. You can only cash in the plan completely – we will not permit part surrenders. Once you have been paying premiums for 6 years, the surrender value may exceed what you have paid in – but it could be less in the early years. The surrender value reflects our investment return over the period of your savings. On taking money out of either plan there may be tax implications – see ‘What about tax?’ in the key features document.

What if I change my mind?

We will send you a certificate showing your benefits and a cancellation notice. If you change your mind, you can return the notice within 30 days for a full refund.

How much will it cost for advice?
How do I contact you?

What is the Rolling Ten Year Savings Plan?

This example shows how you may set up a Rolling Plan to get a pay-out every January to help with Christmas credit card bill or holiday planning.

The image below gives an example of how the rolling plan works. 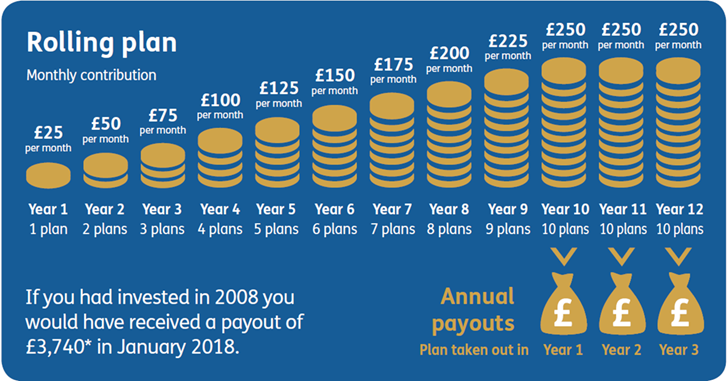 *As at 1 January. Past performance is not a guarantee of future returns.

To take out a Rolling Plan tick the relevant box in the application form.

Taking one out means that we will send you a new policy schedule each year, along with a cancellation notice giving you the option not to proceed with any further plans.